Weighing in at 17 lbs. this Orangemouth provided enough Ceviche for a week. The Orangemouth Corvina has an overall tan appearance with a silvery belly and a grayish/pink tail. It is characterized by an elongated body, large oblique orange-colored mouth with a projecting lower jaw that reaches the eyes and two canine teeth on the roof of the mouth. The Orangemouth Corvina is sometimes confused with the White Sea Bass and others from the Sciaenidae family but none of them have an orange mouth.

I have caught these out of the surf up to 28 lbs. Great to eat, fun to catch.

All of the fish seen below were caught from the shore in the surf here in Mazatlan. 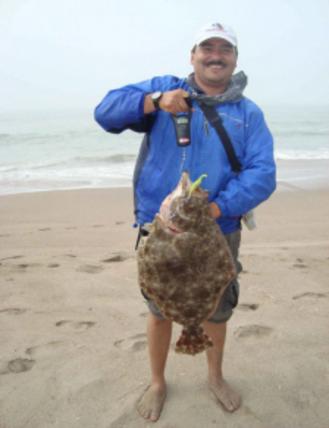 The Mexican Barred Snapper is easy to identify by its distinctive white and red-brown stripes running down their sides. When first landed their stripes and colors are very pronounced but fade quickly with time out of the water. They are a member of the Snapper/Lutjanidea family commonly known as Pargos. This particular Pargo is also unique in that it is the only Hoplopargus in Mexican waters, its cousins like the Yellow and Dogtooth are in the Lutjanus genus family.

There are records of this fish reaching up to 3 ft., however, downward pressure on the species makes finding one that size very uncommon. Typically these fish are found in rocks and caves at depths up to 100 ft. and true to the family name once hooked it requires an agile angler to actually bring one in. Although in early spring this snapper is found in the surf in Mazatlan. As far as table fare they can be prepared many ways and are delicious. 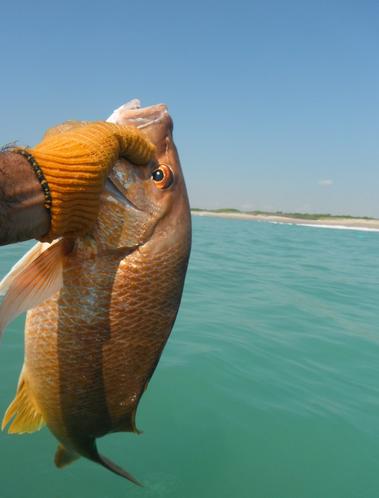 This White Sea Bass was caught by a local angler Manuel Mendoza. As with the Snook we use swim baits, metallic lures and buck tails to catch these too.

The White Sea Bass is characterized by its elongated body, yellow tail fin, large mouth and a ridge along the length of its belly. It is metallic blue to copper on its back, with dark specs on its sides, and silver on its body. This fish is excellent table fare. My personal favorite for  making Ceviche. 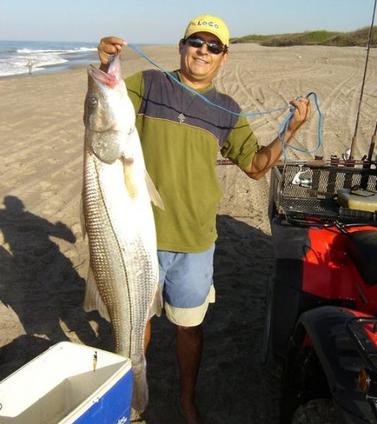 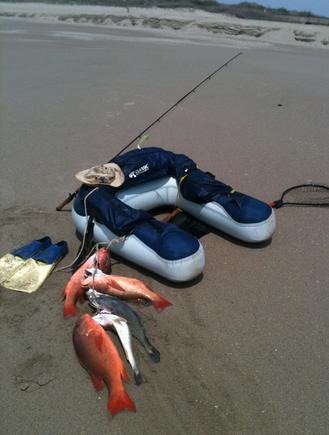 The Dog Snapper, the king of snappers. Above is a picture of another local fishing buddy named Gollo. He is definitely in the elite surf master league. This fish weighed 14 lbs., but as Gollo explains it he thought he was reeling in a 25 pounder. Cagey fighters, after hooked they will give a short run and then they will head down for the rocks. Once bunkered down in the rocks its a real challenge to bring in and in most cases a novice angler will lose the battle with this fish. If you are lucky enough to bring one in be real careful when removing your hook from its mouth, just take a look at those canines. Ouch! Top shelf table fare, their white flaky meat melts in your mouth.

As you can see in the picture this one was brought in with a swim bait, but its the guys fishing bait who catch more of these fish. Go figure. The Dog Snapper can reach up to 100 lbs. and 5 ft. in length, but in the surf 40 lbs. seems to be the ceiling.

The Dog Snapper is the largest in the Snapper family. Distinguishable by its massive size and stout body that varies from a deeper to lighter red. They will have 8 or 9 bars on the upper portion of their sides and a silver color underneath. 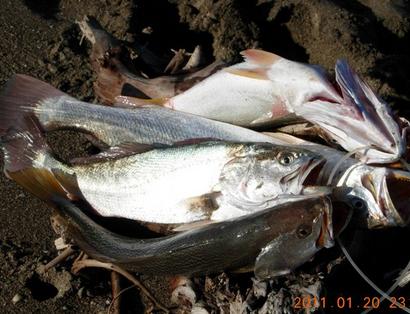 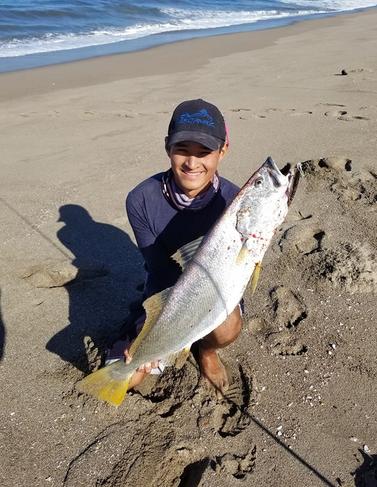 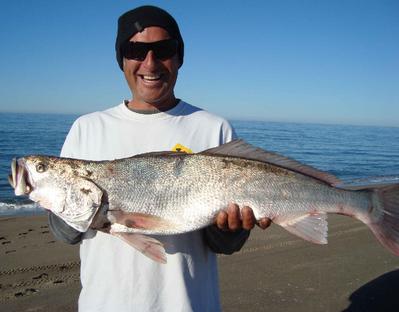 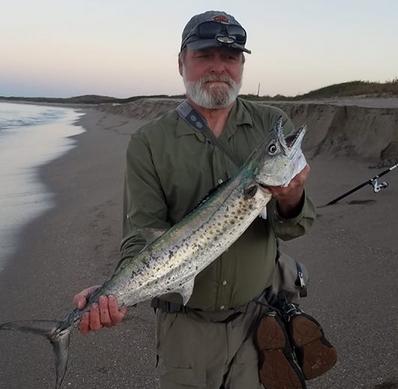 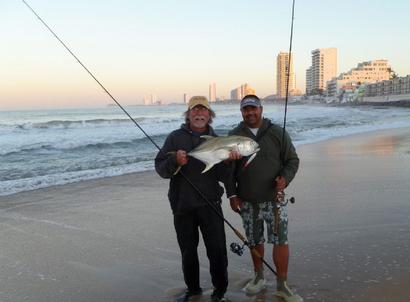 This isn't the best picture for identification, but more important is to see that this fish can be caught in the surf. Without question the most striking in appearance, the Colorado Snapper has a deep red/orange body with a pinkish belly. Their color is brilliant right out of the water and what a site to see if you run into a school of them feeding on the surface. They have  sharp foreboding teeth but not as fierce as that of the Dogtooth. And like the rest of their family are excellent fighters and great table fare.

This 51 lb. beast was caught by my friend Antonio at one of our local surf-fishing  spots.

Black Snook has an overall silver appearance with a strong prominent black lateral line. It has an unmistakable shovel-shaped head with a large mouth and projecting lower jaw. The body is compressed and the snout depressed and Pike like..Their eyes are set far apart. They are great fighters and excellent table fare.The core group of surf fisherman here typically use swim baits, metallic lures and buck tails.  Armed with 10-13 ft.  casting rods, high quality reels loaded with 30 lb. Power Pro Mossy green it becomes only a matter of finding the fish.Though there are many who prefer bait fishing with shrimp or squid, they too produce some great catches. This is the biggest Snook I have ever seen caught in Mazatlan.

​     Sierra seen here was caught by Tim from Iowa. They are good fighters typically caught on metal lures. As far as table fare goes they are red meat and well, require some work before they are decent to eat. Stay clear of those razor sharp teeth when handling, it's the real deal.

The photo on the left is a Yellow Snapper I caught here while ETF'n. Great tasting and fun to catch, the Yellow Snapper is highly sought after. Just like his larger cousin the Pacific Dog Snapper they are caught more often on bait than lures.

The Yellow Snapper is a member of the Lutjanidea Family; known in English-speaking countries as Snappers and in Mexico as Pargos. It is distinguishable by its yellow tail and rosy red colors in the front and yellow on its back. The younger Yellow Snappers have a distinctive blue streak right below their eyes. 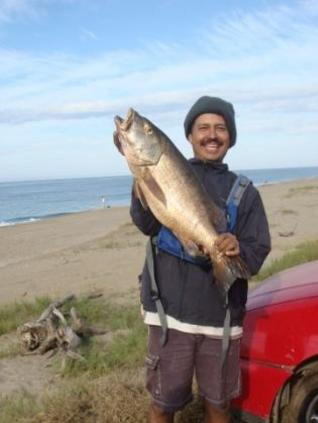 The Pacific Jack Crevalle aka Toro is one of, if not the, most abundant and readily available to catch surf fish here in Mazatlan. The nickname "Toro" was bestowed upon them for a reason; they fight like a bull. Anyone who has ever caught one will testify that they are great fighters and fun to catch. Not a big surprise when you consider they are a cousin to the Roosterfish. When they come in close in the surf chasing bait it is a fury of action. Birds diving getting their fill, bait running for their lives and Toros feasting on them. Every cast you will hook up. Then hold on and be ready for a fight. The Toro in the picture above was caught by Jeff King, probably weighs about 7-8 lbs.. As you can see in the background you can catch these guys right in front of your hotel. Toros will take bait, but it is most fun to hook them with metallic lures like Kastmasters and Krocodiles. 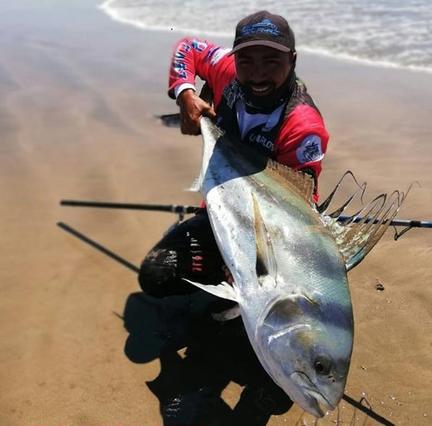 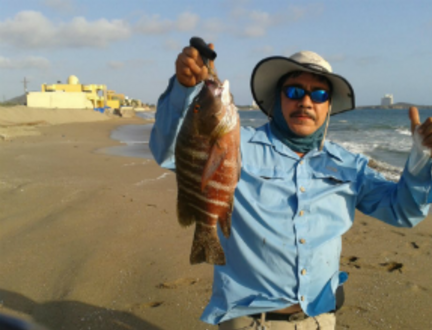 Without question, pound for pound, the best fighter in the surf, Gallos are very challenging to catch but when you do it is well worth the time and effort. Catch and release only as they are low on the ladder in terms of table fare. Absolutely impossible to confuse with any other species of fish they have a spectacular "rooster comb" on their back just behind their head. A truly exotic fish, their look is one of a kind. My amigo Carlos G. seen here with a monster, I can set you up with fishing Roosters with him in the surf, ask me how.

This little batch of Granizas was caught by my good friend Ernie from Ontario, Canada.

Striped Curvina has an elongated body with an oval cross-section. It is generally silver with brownish wavy streaks on the back and sides. There is a pale band along the lateral line. Like it's cousin Orangemouth and White Sea Bass this fish is exemplary table fare. 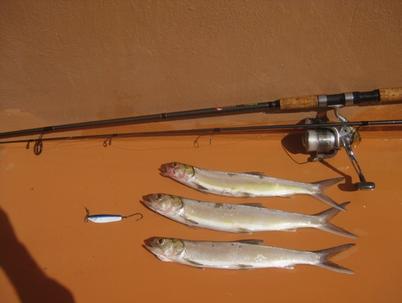 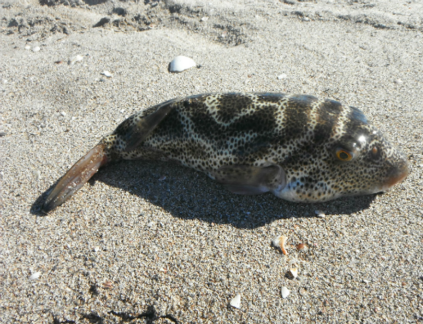 It has taken 2 years but at long last this fish has been properly identified as a Dappled Flounder. The credit goes to Dr. John Snow from San Diego, CA. and his colleague Fish Scientist Milton Love of the University of California Santa Barbara. Thank you both.

My buddy Julio caught this 13.5 lb.'er. It's not that often we catch Flounder here, to bring one in is considered a real prize. If you've caught one before you know they put up a great fight and are excellent table fare.

The Ladyfish are fun to catch in spite of their small size. Once you hook one they will come flying out of the water in an attempt to throw the hook. And 9 out of 10 times they will. On light tackle its a good time. They are a surface feeder so you can see them when they are around and feeding. Cast a metallic lure into the boil and you will hook up. Given that they have lots of bones the only way to eat them is in Ceviche, but it is very tasty. It takes some time to remove all the tiny bones, but worth it.Ladyfish have a long, cylindrical slender silvery body with tiny scales. Their soft mouth has a projecting lower jaw and they have fairly large eyes. You will know when you have hooked one because they are unique in their fighting/jumping style.

The Bullseye Puffer has a fairly elongated body whose width is typically 25-33% of their length. Olive brown in color on both their back and underbelly. They have narrow yellow lines on their head and back. The bullseye on their back is where they get their name. There are dark little dots all over their body, except for their fins which are without. The iris in their eyes is yellow. The head and body is covered with small spines and they are without scales.

They are found in areas with sandy bottoms and sometimes around rocky reefs. Their maximum length is 48 cm. (18.9 inches) Bullseye Puffers can be caught with shrimp, squid or sand crabs. As far as table fare this is a questionable topic. A delicacy for some people, they do possess a chemical named tetrodotoxin where if released during the cleaning process can result in serious health problems. I officially recommend catch and release with this species.